For decades, Greeks have enjoyed the Freddo as a way to cool down while enjoying coffee, and it’s a drink that’s both deeply ingrained in Greek culture and hugely popular amongst locals.

To answer both these questions, I spoke with Christos Zamanakis, Education and Quality Manager at Dimello Coffee, and Michalis Katsiavos, 2018 Greek Barista Champion, to explore the past, present, and future of this popular drink. 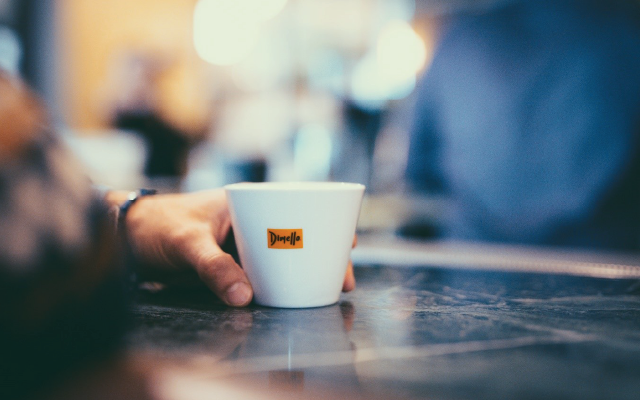 HOW WAS THE FREDDO CREATED?

Greece has a typically Mediterranean climate and is sunny on most days of the year, so the population enjoys iced coffee beverages all year round. “Greece is the country in which you can enjoy sunny days all year long. As a result, people prefer cold beverages. In this context… coffees on ice,” Michalis explains.

The Freddo is said to have been created in the nineties and was served alongside a similar cold, instant coffee-based beverage, the Frappe. “The birth of Freddo in the mid-90s was a revolution and in a few years, it outgrew [the] Frappe. The preparation is similar – replacing the instant coffee with a double espresso. In a country with a highly developed coffee tradition… this was a natural consequence,” Christos tells me.

Espresso was first introduced to the Greek coffee scene in the 1990s, and soon thereafter, specialty coffee shops started popping up. As a result, consumer tastes started to shift towards quality coffee beans and specialty coffee in general. 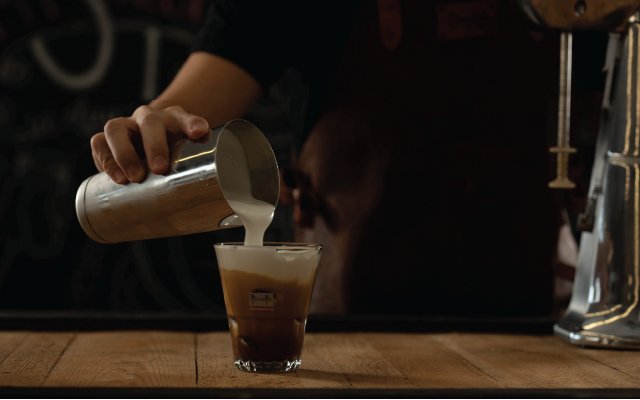 THE MODERN FREDDO & ITS VARIATIONS

Greek coffee culture has evolved over time, and so has the Freddo. Higher quality blends and single origin coffees are now being used as drink’s base, further enhancing its flavour. As Christos explains, “using specialty coffee will result in a high quality [drink], as anticipated. Freddo is the only answer if you want a cold beverage with the qualities and consistency of a traditional double espresso.”

The Freddo can be consumed as an espresso or cappuccino. While individual variations no doubt exist, a popular recipe for creating a Freddo espresso involves blending a hot double shot of espresso with ice and sugar in a drink mixer, creating a signature foam. The Freddo cappuccino follows the same process but is topped off with a layer of cold, textured, foamy milk. Both are served in a glass, over ice.

According to Michalis, “You can easily spot the Greek preference when it comes to Freddo[s]. I personally believe we choose cold beverages not only due to the weather but also because of the blend’s unique features… Freddos have their own different flavour… a unique one.”

The beverage has remained close to its origin in terms of how it is prepared. “Freddo coffee[s] ha[ve] been in our lives since forever and [are] always contemporary. As a result, there is no modern way to describe it. We like it as it is and as it has always been,” Michalis says. 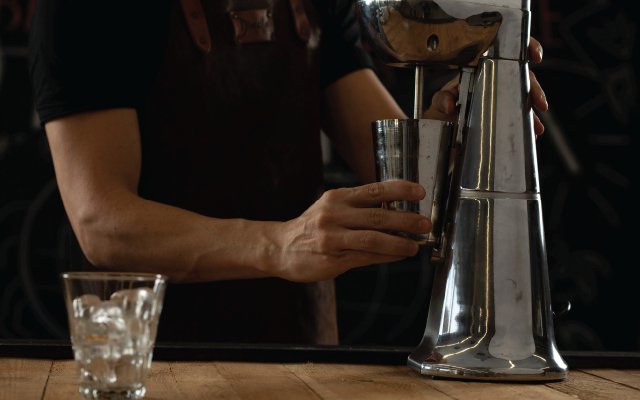 MAKING YOUR OWN FREDDO ESPRESSO & CAPPUCCINO

The key to creating a Freddo is using a drink mixer, as it helps create the required smooth texture. Christos explains that “[The] Freddo is a beverage that’s prepared only on demand. A drink mixer is the proper equipment for the Freddo preparation as it’s faster, easier to clean, and unlike a blender, helps cool down the coffee rapidly without crushing the ice.”

The quality of the espresso also plays an important role. “Everything starts with a perfect shot of double espresso. How the coffee is treated afterwards … [will alter its] perceivable organoleptic profile, but you [will still be able to] recognise [its] aromatic quality [and] enjoy [its] full, silky texture and pleasant aftertaste,” Christos tells me.

To prepare your Freddo, add freshly extracted espresso shots and a few ice cubes to a mixing receptacle. Ensuring that the right amount of ice is added is important, as too much will dilute the drink, and too little will keep it from becoming cold.

While sugar can be added to the espresso after extraction, this isn’t recommended with specialty coffee, as an unsweetened drink will let the coffee’s natural qualities stand out. A full-bodied, low acidity coffee will ensure the coffee’s flavour endures even after mixing. Most low to medium acidity blends are suitable for Freddos, with popular origin coffees coming from India, Brazil, Indonesia, Guatemala, and Costa Rica.

The Freddo cappuccino continues where the Freddo espresso stops. Cold milk (chilled to 3–5°C/37–41°F) is added to a mixing receptacle, and is shaken until a smooth and glossy foam is created. Skimmed milk is usually preferred here as it generates a longer lasting foam compared to whole milk.

Once the milk is ready, it’s poured over the foamed espresso so that it forms a layer. It should not be stirred, as the foamed milk needs to sit atop the espresso layer. When drinking the Freddo cappuccino slowly, the foamed milk will eventually become less solid and incorporate more with the espresso, creating a new textural experience. 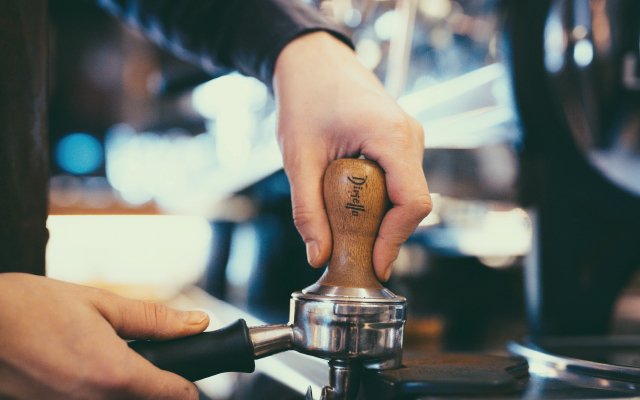 Where Does The Freddo go From Here?

Since third wave coffee was first introduced to Greece in the early 2000s, more people are familiar with specialty coffee, with specialty and espresso-based beverages becoming popular choices. In addition, the number of bean importers and roasters has increased, with most coffee coming from countries like Brazil and Colombia, as well as Kenya and Ethiopia.

Despite its firm standing within the Greek specialty sector, the Freddo hasn’t had a strong impact on other countries. However, the largest coffee chains in the world have acknowledged its presence.

Starbucks introduced a version of the Cappuccino Freddo to select European menus in 2018, calling it the Cold Foam Blonde Iced Cappuccino, and revealing that it’s inspired by Greece. Costa Coffee is a British chain of coffee shops that currently has 3,882 stores in 32 countries. It also allows customers to order whipped milk drinks served with flavoured syrup, cold brew, or iced cappuccino.

While widespread adoption has yet to take place, Michalis believes that Freddo will be seen more frequently as signature drinks in barista championships. “We see more and more signature cold beverages being served in the coffee stage… Most of the time they succeed in creating a unique experience [for] the customers thus, I believe Freddos must be included in the barista competitions, under a special category of course.” 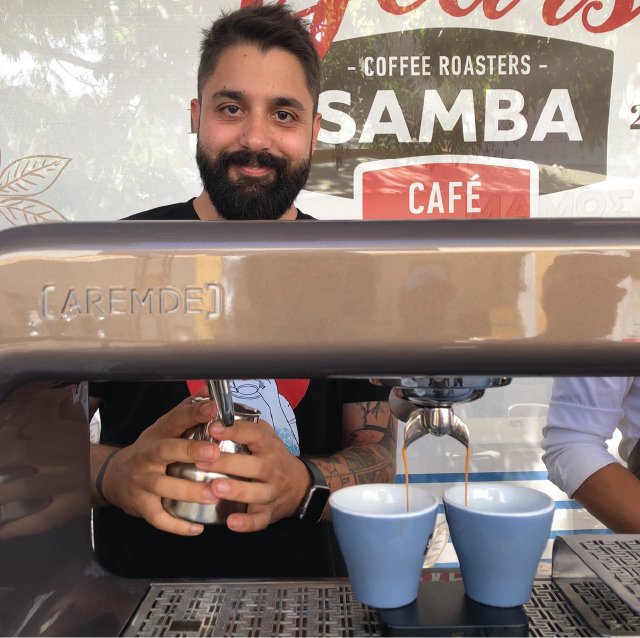 Freddos are an integral part of Greek coffee culture for both old and new consumers, but their potential for the international market still needs to be tapped into. The key to increasing its reach might come down to demand, so the next time you have the opportunity to do so, make sure you request a Freddo espresso or Freddo cappuccino.


← Back to Community News